âSound and Furyâ The conference season comes to a close 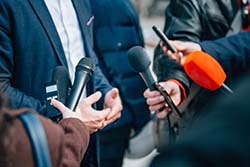 Head of Redress, Sean Hooker, gives his opinions on the political party conference season and how this year’s announcements may influence the property sector in the future.

The political party conference season is always a fascinating time - the media whip themselves into a frenzy and speculation and rumour are rife. Conferences are also opportunities for the political community to showcase their visions and plans for the country to a relatively wide audience.

Rarely are the announcements made at conferences earth shattering, as the real work of politics is undertaken in Parliament and by the lengthy policy making process overseen by the Civil Service through working groups, consultations and committees. There are however occasionally surprise revelations thrown into the mix from the conference stage, for maximum political effect and the wow factor politicians crave.

It is therefore important to view these stage managed media events as barometers of the political climate and take the time to consider how their ideas would affect different areas of society and the economy.

Of course, for any individual or group the immediate concern is how various policies will impact on them personally. I was of course particularly interested to hear what the parties had to say on the property sector and specifically what differences in direction the major players would have on the future of the industry.

To be fair, given the amount of change the property world has been through in recent years and the potential for further developments already in the pipeline, I was not anticipating that there would be any huge surprises. At least nothing that would have a seismic effect on the scale that, say, the tenant fee ban will. However, given the high profile that housing is occupying currently in the political arena, I knew that the sector would inevitably be a jousting ground for the parties.

So what were the key takeaways from each of the three parties?

Starting with the Lib Dems, while they are a bit of a diminished force since the heady days of the coalition, with recent divisions widening in the two big parties there is an increasing possibility that they could once again play a role as the honest broker in a future government. After all, over 70 per cent of their 2010 manifesto made its way into legislation in some shape or form during the coalition and there is a tendency for their ideas to be adopted by higher profile players when politically expedient, so as a party they still matter.

Their mantra this time round in Brighton was “Demand Better” and specifically on housing and property, their emphasis was on how to deliver the short-fall of houses and homes the country needs.

In order to deliver this they proposed setting up a British Housing Company as a dedicated ‘arm’s length’, not for profit non-governmental body to acquire land of low amenity at current use value through compulsory acquisition. This would be used to reduce prohibitive land costs and excessive developer profits.

In addition, they want an expansion of ‘Rent to Own’  that gives renters the first option to buy the property they rent when the landlord wants to sell, using an independently obtained valuation.

On the private rented sector, they back the tenant fee ban, longer tenancies and a compulsory national register. They also call for a ‘Help to Rent’ scheme backed by the Government to provide tenancy deposit loans for the under 30s. There was also a significant amount of talk surrounding green technology and sustainable communities that could help to improve housing, stock and living conditions.

They also want to see 200 per cent council tax levies on second homes being bought purely for investment speculation.

Rebuilding Britain for the many not the few – Labour policies.

Moving on to Labour, the rental sector in the lead up to the Liverpool gathering was waiting in trepidation for something radical to come out of the Labour party conference. However the reality was less dramatic. Labour re-stated their intention to back a national register, enforce a strong fee ban and to introduce longer tenancies. They put their weight behind abolishing section 21 evictions.
The Labour Party sought not only to match the Tories in their protection of tenant rights, but to raise the bar even higher. Their “ace” card was a plan to introduce tenant unions up and down the country. Backed by £20 million of public money, these groups would advocate for and represent tenants on matters such as standards and housing rights. How these groups would work and how effective they would be will remain to be seen, if they are ever adopted.

Labour were low key on rent controls, other than announcing that they would allow city councils in certain parts of the country to introduce them, in a limited way.

On the issue of increasing housing stock, they proposed to set up a Sovereign Housing Trust to purchase land at cheaper prices in order to build more homes.  The mechanics of this remain to be revealed but the initiative would be backed by tax payers’ money and would work in partnership with local authorities. How this would fit in with the revamped Homes England also does not yet seem clear.

The Conservative’s descended on Birmingham with a one word slogan, “opportunity”.

Their position on housing was outlined in a speech by the housing minister, James Brokenshire, but also featured in the PM’s announcement that there would be a further hike in stamp duty for overseas buyers and that the proceeds would be used to tackle rough sleeping.

The big announcement by the minister was the introduction of a ‘New Homes Ombudsman’ to deal with redress for those people involved in the purchase of new build homes. It would mean that developers, and those that sell new builds, will come under the same auspices as current estate and lettings agents do. It appears that the plan will be lock stock and barrel based on the recommendation put forward by the All Party Parliamentary Group for Excellence in the Built Environment earlier in the year. It therefore appears to be a quick win for the Government and if they start to deliver their ambitious house building programme it could go hand in hand with this.

There was nothing on further regulation or a housing court, however these ideas are firmly on the table and will probably re-emerge later in the year. It is likely that this will be around the time that the autumn statement will be delivered by the Chancellor of the Exchequer.

A further announcement by the PM that the Government would be relaxing the borrowing restrictions on local authorities in order for them to raise capital to build new homes seems to have been widely welcomed and considered long overdue.

To conclude the conference

All in all the packages announced by all three parties appear broadly similar, with albeit with subtly different nuances, but basically heading towards more regulation and tenant friendly policies. As ever however, the devil will be in the details.

The industry remains cynical and anxious about change. This scepticism may be well-founded, given the failure of governments past and present to deliver, however the latest round of party announcements appears to have been fairly benign in terms of major new policy with disclosures mostly heavy on rhetoric but light on detail.

With the curtains now descended, Parliament returns this week and the real work starts in earnest.