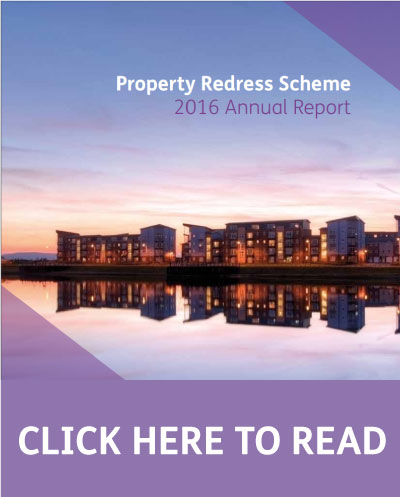 The report shows a 33% increase in membership since 2015 and a 40% rise in formal complaint notifications.

At the end of 2016, a total of 5,259 agent offices (31% sales, 79% lettings) had joined the PRS, with a further 227 property professionals such as inventory clerks choosing to join the scheme to promote best practice within their organisation. Total membership of the scheme currently stands at more than 6,000 members, with almost 700 UKALA (UK Association of Letting Agents) members now having access to PRS membership following the announcement of a formal partnership in October 2016.

As well as growth in membership, the annual report also reveals that PRS has seen a 40% increase in formal complaint notifications. In the report, Head of Redress for the PRS, Sean Hooker, acknowledges that while this can partly be attributed to overall growth of the scheme, he believes it also indicates an upward trend in consumer awareness of the complaint process.

The most common causes for complaints were property management (29%), followed by deposits (27%) and problems with rent (15%).  Service and fees both resulted in 6% of complaints. Tenants made up the majority of complaints at 51%, followed by landlords at 35%, leaseholders at 8%, buyers at 3% and sellers at just 1%. The PRS awarded a total of £152,819 in compensation with the average amount awarded being £375.27.

PRS Head of Redress, Sean Hooker said: “Although formal complaints have risen, so too has the number of complaints resolved at the early stages of our process. Around 40% of our cases are resolved at recommendation stage and 99% are dealt with in less than 90 days from receiving the initial complaint through to a decision. We continuously look at improvement and initiatives to increase the effectiveness and delivery of our service.  We hope that the most recent introduction of our online complaint system will further reduce the average time to complaint resolution.”

As well as statistical highlights from 2016, the PRS 2016 Annual Report includes summaries from Lord Monroe Palmer, Chairman of the Council, Sean Hooker, Head of Redress for the Property Redress Scheme and comment on the industry from each member of the PRS Advisory Council. The report also provides greater insight into the complaints process operated by the PRS, case studies, a financial overview, information about the PRS charitable contribution, a list of expelled members. It also includes a ‘Spotlight on Inventories’, with input from two of the largest inventory providers, No Letting Go and VeriSMART, as well as Suzy Hershman, Head of Dispute Resolution at mydeposits.

The Property Redress Scheme Annual Report 2016 can be read on our website here: